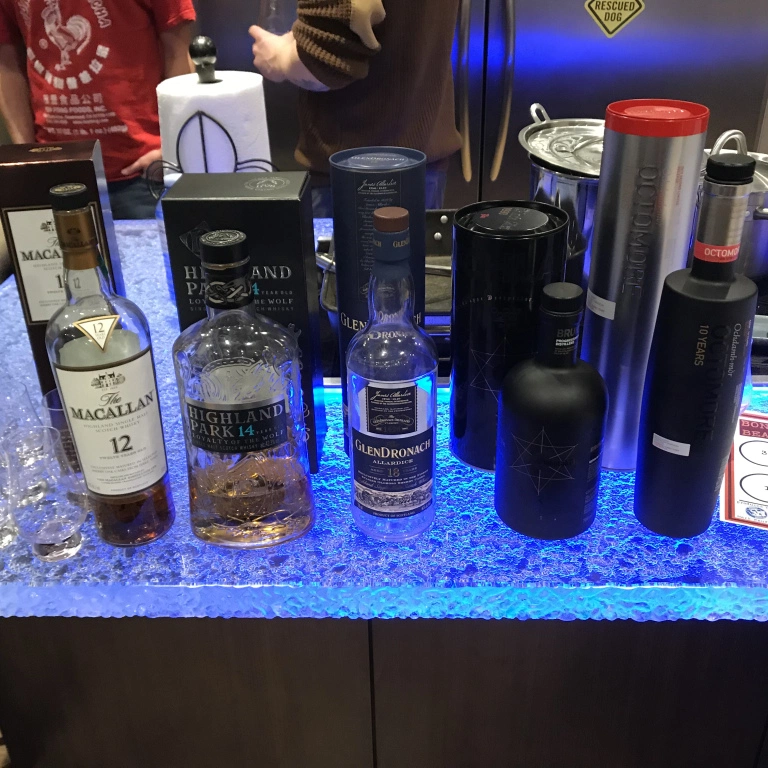 After a slightly late start we devoured the weight of Rory’s bicycle(maybe more-that thing is light!) in his expertly grilled sausages and big pot of hand-smashed potatoes to prepare our tummies to be enlightened with #whiskyawesomeness.

This was in truth a semi blind and not a full blind tasting, as some bottles were leaked at last month’s Sherry Spectacular. I poured the whisky, and Colin, Chris W, and Rick arranged them on my sub par(I blame the injured knee) tasting placemats. We moved up, by the way, from 15ml to 20ml pours(closer to 25, blast that jigger…) which everyone seemed to appreciate.

After much deliberation, the favourites of the night were all but unanimous: Octomore 10 Year (2016 2nd Release) and Black Art 06.1, both from Bruichladdich Distillery, a Scottish distillery on the Isle of Islay. Quite a few people also really loved the Highland Park Loyalty of the Wolf, and it may have pipped Glendronach 18(2019 – actually 23 years old!) for 3rd place. Macallan 12 proved itself a worthy challenger but fell short next to true malt giants.

Then the dessert tray was unveiled. Mike’s Supe’s Up Spicebox Cupcakes were a hit that truly hit the spot after we arduously tested and compared the lineup of libations.

When we thought things were drawing to a close, Rory surprised us all again with some excellent hand-stamped espresso. A little caffe does the post-whisky-tasting palate good!

Finally, and unfortunately, after a ton of fun, malty and otherwise, the 7th Club Night came to an end. However, do not fret, for we shall meet again in four short weeks on October 30!

Huge thanks to Rory for giving his home, for arranging two of the bottles of whisky (that he had to drive to the border for) and for his adept grill and espresso machine expertise.

Special thanks to Chris Wiebe for bringing that special Highland Park 14 for us.

Further Special thanks to Mike for taking the time(as he often does) to whip up something decadent.

Final Special thanks to Person X for bringing Item Alpha. You know who you are.

If any of the members who attended want to send me photos to add please do so!