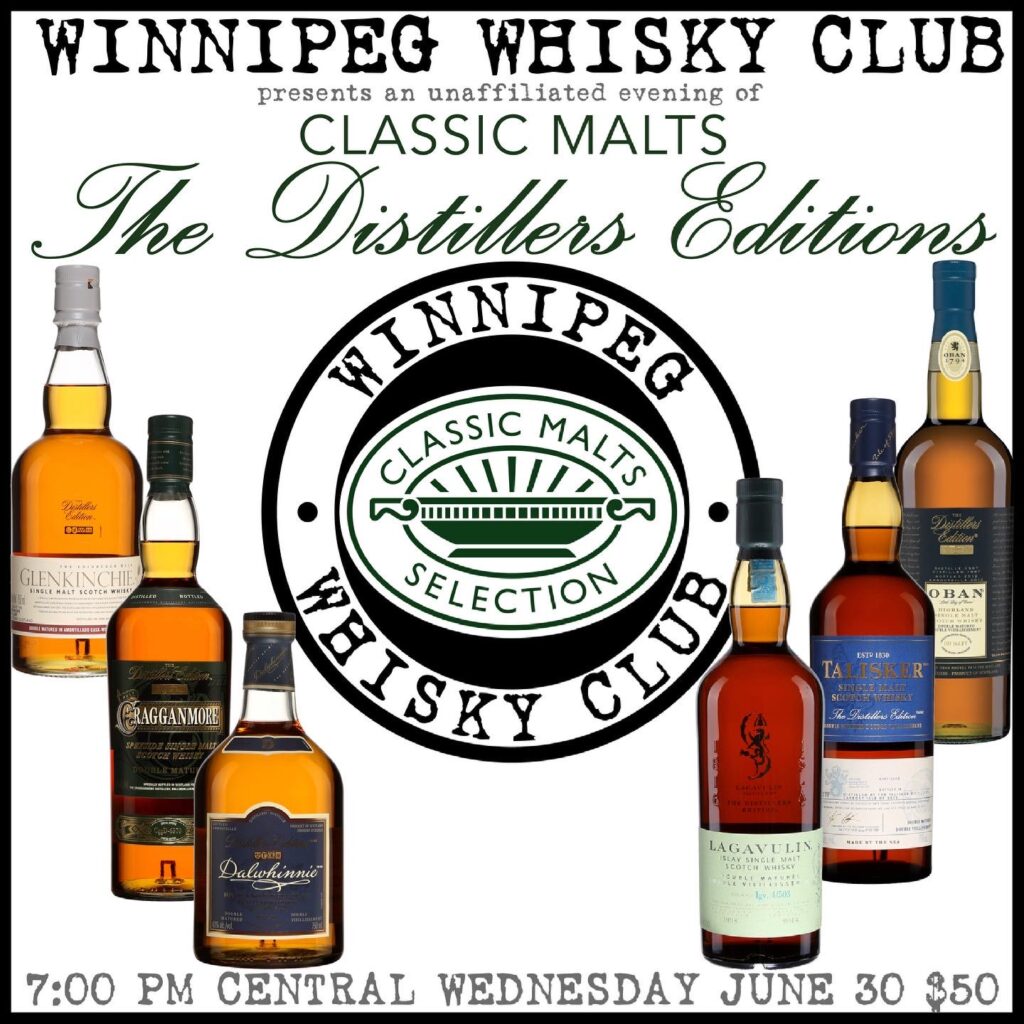 How do you make a great whisky even greater? Finish that sucker in a fancy cask!

Join us June 30 for an unforgettable evening with some of your favourite whiskies! Even better, join us as a member!

So you like Lagavulin 16 eh? How about Talisker 10? Never tried Craggenmore? Ever heard of Glenkinchie?

These distilleries, and a few classic others have more than one thing in common. But they also make a sweet lineup from sweet to peat, making their differences very apparent.

The main thing these distilleries have in common is a big one. They are owned by Diageo, a super star in the alcoholic beverage industry. Diageo’s portfolio of brands range from the Classic Malts of Scotland, to Crown Royal, to Captain Morgan and Smirnoff Vodka. They have their mitts on all corners of the booze industry and I can bet a dram that you’ve heard of 95% of their brands. For better or for worse, they own what you are drinking more often than not.

Another similarity is why we are gathering this month. The Distillers Editions!

Not to be confused with Distiller’s Edition. Or Distillery Edition. Let me explain.

They’re called ”The Distillers Edition” (and not Distiller’s or Distillery) because these single malts were all owned and operated by The Distillers Company at some point.

The company merged with John Walker & Son and Buchanan-Dewar in 1925.

It was acquired by Guinness in 1986, forming United Distillers, which was later renamed Diageo.

But enough about the past, the best part is what the whisky is doing.

Each expression from the Distillers Editions start out as a core range expression (like Talisker 10 for example) from their lineups and then given a big old flavor boost in finishing from a specifically designated cask for an additional period of time. On average about 6 months to a year. They are typically then given a vintage, listing the distillation date and bottling date instead of an age statement.

Some of these distilleries are very good at producing a new Distillers Edition every year, but some do not and it is an utter shame. Talisker and Lagavulin seem to be very consistent whereas the others require some searching for older bottlings. But they are still out there!

Here are the fun facts about the expressions we will be trying this month and the casks contributing to their whisky awesomeness.

A little bit more news this month, as was similar to last years June event.  Our big guy President Mark will be out of continent this month and I will be doing my best to carry this meeting as well as he can. Feel free to haggle me if I start to veer out of control!

Another tidbit of important info will be sample pick up locations as they will be different this month.  Our board member Carla and I will be locations you may come visit to grab your samples prior to the night of fun. Please feel free to reach out to myself or Mark for location addresses etc.

See you all there!